Following Jesus, true discipleship, is not for the feint of heart. Jesus is not of a fan of the familiar, routine, or status quo. Jesus likes to challenge assumptions, rouse the rabble, and provoke the powerful with truth. Once you put your hand on this particular plough, there is no turning back. It just isn’t possible because Jesus is unconcerned with what the past holds and far more interested in liberating people from oppression right now.

In the last four weeks I’ve been in four different cities and three different states. I’ve spoken at two different suicide prevention conferences, participated in a workshop at the United Church of Christ General Synod, and attended the Minnesota Conference UCC Annual Meeting. I’ve been in four states (MN, NH, MA, and WI) and met up with friends I haven’t seen in decades, and friends I haven’t seen for a few weeks or months. Waves of nostalgia wash over me as I drive through the mountains and walk on the beach. I’m overwhelmed with a longing for what used to be when I encounter friends I haven’t seen since seminary (more than 25 years). This last month has given me plenty of prompts to think about the course of my life and the unexpected twists and turns of my ministry.

June began with a trip to Western Massachusetts where I spoke at a conference. I met up with a high school friend and talking with her took me right back to the days when we were inseparable. We talked about the weirdness of aging where the body feels the years, but the mind and spirit have no concept that time passes; we could easily have been out on a night when we would have to go to school in the morning (except for the multitude of years between then and now).

This experience was followed by the MN UCC Annual Meeting. While I have made friends in MN, I was momentarily consumed by a longing for folks I’ve known a whole lot longer in other states. In those moments, I would have turned back the clock to years gone by without hesitation. At least I would have until I realized what I would not have in my life if I turned back the years. No time machine for me.

Then I went to General Synod and stood at the intersection between now and yesterday. I was there on behalf of the UCC Mental Health Network doing good work. Then I encountered people from across my years in ministry. The longing for what was threatened to overwhelm me once more. Those close friendships from seminary that nothing else quite replicates… those conversations in the dining hall… the hopes and dreams for serving the church… Oh, to begin again! No, not really.

Today, I stood at the ocean’s edge after speaking at another suicide prevention conference in New Hampshire. Nothing renews my spirit quite like the song of the sea and the feel of the sand on my bare feet. As I watched the tide (and the fog) roll in, I reflected on my ministry and where following Jesus had taken me. Never in the proverbial million years would I have ever guessed where Jesus would lead me. Once I figured out that I was called to ministry in the church and not in academia, I thought I had some idea of what that would be. Nope! Not even close.

The church I had prepared to serve no longer exists, and probably didn’t really exist even as I entered ministry. I had visions of youth group mission trips and adult spiritual formation retreats, with some preaching and Bible study in between. The intersection of mental health and faith, let alone suicide prevention, wasn’t in my wildest imaginings. The fact that I speak openly about my early struggles with mental health, being bi-sexual, wrestling with an archaic theology, and telling my story of suicidality and suicidal behavior, is not what I had envisioned. Yet, I wouldn’t trade it for anything. 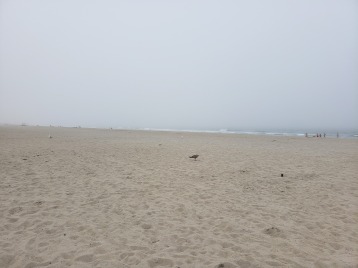 In those moments when I think I would, when I think about going back when I kept all these things secret, it’s like watching the fog roll in on the beach. While the illusion of solitude is good, the temperature drop is a little chilling. Sure, I can tell myself that life was somewhat easier “back in the day,” it’s a lie that takes my attention away from the challenges of today. If I am distracted by the church of yesterday, I can miss the joys of today. If I think the past holds the answers, liberation of any kind may prove impossible.

Following Jesus has taken me all over the U.S. My journey of discipleship has made me go places I wouldn’t have the courage to go on my own. While the beach sings to my soul like no place else, I’ve also been restored by songs of the mountains, the woods, the lakes, and the desert, and the prairies. Without my hand on the plough I would never have come out as bisexual and wouldn’t have given a thought to LGBTQ+ inclusion in the church. I wouldn’t have marched with Black Lives Matter or protested with Latinx folx, or carried signs protesting the current administrations policies on refugees, or shared the journey with those struggling with symptoms of mental illness, or a thousand other things. Once I put my hand on the plough, I committed to leaving behind the shy, fearful days of my youth to become one who shows up and bears witness and tries to lend my voice to those who often go unheard.

It’s been a weird and wonderful journey. But looking back with yearning for what was takes me off-track. Jesus wants us to carry the lessons of where we have been not so we can recreate the past, but so that we can build the Realm of God here and now with the wisdom and compassion we’ve gathered on the way. And lest we forget, the plough creates the best furrows when many hands are on it. We do not and cannot follow Jesus, be healthy disciples, if we fool ourselves into thinking that we are alone. There’s Paul’s great cloud of witnesses and there is also the folx who are with us, hands next to ours making sure we plough a continuous row.

May we all stop looking back with yearning and celebrate all those whose hands guide the plough with courage and strength, wisdom and compassion.

Hi. I am a pastor, an author, a painter, and a poet. My latest book is available now to order from Chalice Press, The Lifesaving Church: Faith Communities and Suicide Prevention (http://amzn.to/2DZ55EU).
View all posts by rachaelkeefe →
This entry was posted in Musings and tagged 1 Kings, Discipleship, Faith, LGBTQ+, Luke, Mental Health, Mental Illness, Pentecost, religion, transformation. Bookmark the permalink.