Stumbling Toward a Worthy Life

How many of these names do you recognize?

If you live in the United States you should know these names as well as you know that the lion killed in Zimbabwe by a Minnesotan dentist was named Cecil. I’m betting that most of us only know one or two names on this list. I admit that I didn’t know all of them until I did a little research. Seven of them died in holding cells and the eighth was shot by a university police officer. Five of them are Black, one is Choctaw, and one is Lakota. They all died between July 13th and July 28th. These are the names I found with a cursory internet search. I’m betting there are more.

Why is it that when one fool kills a lion for fun, people are vocally outraged and petitions and Kick-starters pop up all over the place? But when People of Color are dying in police custody or are shot by a police officer, the names slip by with little fanfare?

I used to tell myself that it was easier to feel compassion for animals who were killed, abused, or neglected because they are dependent on human beings for so much, especially domesticated animals. However, I’ve come to see the flaw in that thinking. This kind of thinking is born out of a “blame the victim” mentality that I really cannot stand. So I’ve stopped doing it and hope that others will, too. While I do believe that life is sacred, all of it, I cannot grieve more for a lion than I do for the people I have named. These were people who had friends and family who loved them and they did not deserve to die. They all would likely have gone on living if they had not come into contact with the police. Is this not more horrifying than the idea that Cecil would have gone on living if he had not come into contact with a hunter?

In this week’s Gospel reading Jesus clearly states, “I am the bread of life.” This is a message that many have failed to hear or take to heart. We have a tendency to hoard this bread for those who look, sound, and live like us. We have yet to learn how to live it and give it away. I know several clergy who are grumbling about the lectionary spending so much time on “bread.” Clearly, given the state of the world, we need these several weeks of readings and, probably, a few more as well because we have not been living out the truth of these passages.

Jesus fed the crowds and the disciples. He did this not just because they were hungry but also to show them how to feed themselves and others. Jesus knew that his followers would be the ones who would continue his work. I’m not sure how well we’ve done that.  People are starving to death – literally and figuratively – while we do everything in our power to make it someone else’s problem, particularly blaming those who are so very hungry for justice.

Paul’s letter to the Ephesians implores us to “live a life worthy of the calling to which [we] have been called.” Paul wrote these words while imprisoned for living out his faith. Even then, he implored people to live a life of love, a life in which all gifts were used and no one person was more valued than another. In other words, we are called to live lives that build one another up and value each person as a wonderful gift from God. We are not called to sit back and watch violence and hatred destroy and injustice destroy our neighbors.

Whether we agree with all of Paul’s views or not, it is clear that he followed Jesus and in so doing risked everything to proclaim a transformative way of love. What are we willing to risk? At what point do we take an active stand against the racism that makes the murder of People of Color acceptable? At what point do we stop ignoring the deplorable living conditions on the reservations of First Nation Peoples? When do we stop accepting that education and medical care are based on economics and skin color? How many have to die before we decide that Black lives really do matter? Are you and I willing to risk everything (or anything) to live out a life of transforming love?

Jesus is the bread of life. We are the body of Christ. Therefore, we are the bread of life and that means we have tremendous responsibility. As much as we are part of the hungry, needy crowd, we are also those who must respond to the need. If we do not offer the bread of life, a way of peace, in the face of hatred, then who will?

Have mercy on me, O God, 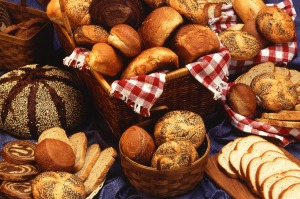 Wash me thoroughly from my iniquity,
and cleanse me from my sin.
For I know my transgressions,
and my sin is ever before me.

Hi. I am a pastor, an author, a painter, and a poet. My latest book is available now to order from Chalice Press, The Lifesaving Church: Faith Communities and Suicide Prevention (http://amzn.to/2DZ55EU).
View all posts by rachaelkeefe →
This entry was posted in Emerging Church, Musings, Sermon Starter and tagged bread, Ephesians, John, Love, Racism, Sin. Bookmark the permalink.